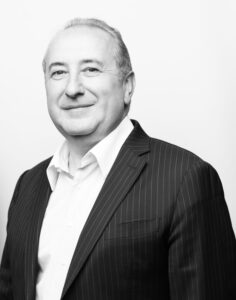 Liviu Tudor, founder and President of RABO, has an experience of 25 years in business and over 15 years in real estate and commercial property, being one of the most significant owners of office spaces in Romania.

The businessman holds the position of President of EPF – European Property Federation, the most representative association based in Brussels – bringing together owners of commercial buildings in Europe with a total value of over 1,500 billion Euro.

Liviu Tudor holds an engineering degree in Aeronautics from the Polytechnic Institute of Bucharest and he attended specialized courses at London Business School.
Currently, Liviu Tudor holds a PhD in Management at the Academy of Economic Studies.

He is the General Secretary of the Romanian Association for the Club of Rome and a member of the World Presidents’ Organization (YPO / WPO).
The owner of Genesis Property is born on March 21, 1961, he is married and has 2 children.

Together with his wife, Liviu Tudor built West Gate Studios, the largest private campus in Romania, where now live about 1,800 young Romanian and foreign students.

We developed this project in partnership with AIESEC, the only apolitical, global, independent, non-profit organization, run by students or recent graduates of institutions of higher education, interested in leadership, management and global issues.